So I was just recently going through some of my older photos on Flickr, and believe me, MY EYES HURT! It really shocked me I even took these photos, and then somehow thought they were good enough to post. What was I thinking?!?

Well we do all start somewhere. Most people cannot pick up a camera for the first time and start capturing compelling content. Becoming a photographer takes work.

So let me show you what I am talking about. Here are some of the images that were still posted on my Flickr as of October 2014. Warning: These could cause pain to the eyes and possible blindness.

Just look at the beautiful colors, composition and photographic ingenuity! 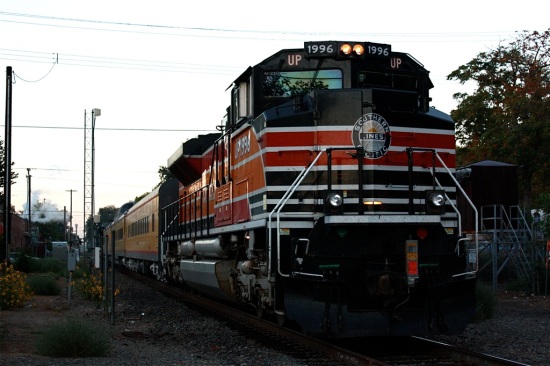 Please take some time to wash out your eyes.

Now, back to business. You might ask “Jake, why did you post these in the first place?” Well that’s a great question and one that will help you understand what I am trying to get at. See, back then I had a much different mindset. The only thing I was focused on was documenting “cool” railroad equipment. I didn’t care how the image looked, what the light was like or how I could edit the photo, all I wanted was the image. This gave me something to look back on and go “wow that was cool!”

Notice a theme with these images? All of them have “unique” or “rare” equipment. The first two have heritage units, which are a huge deal in the foamer community. The next photos depicts a freight train on Cuesta Pass and the final two show vintage equipment. All of these things made me post the photo even though the photo itself was terrible. I thought this equipment was more important than the photo.

The Transition to Railroad Photography

Now you might be saying “well the equipment IS cooler than the photo” and if you are saying that, cool! You obviously have a strong passion for trains and you should keep that. This next bit of advice is for folks looking to make the transition from “equipment documenter” to “railroad photographer”.

Like I said before, we all start somewhere. I guarantee when you first start out, the reception will not be warm. You might here “This photo will never be on RailPictures” or “This, this, and this are wrong with the photo”. It happened to me and many others out there.

And this brings me to my first point: Don’t be defensive.

It is easy to say “this guy doesn’t know what he’s talking about” or “screw him, he’s just a terrible person”, but by doing that, you potentially cut yourself off from quality advice. I’ll tell you a story from when I was just starting out. I remember Steven Welch telling me “you need to learn the railroad” and “your photos are horrible”. For awhile I was defensive and arrogant. I thought, no way are my photos that bad and I certainly know the railroad. Luckily, I eventually came around to listening to him. He ended up teaching me the basics on composition, lighting and the railroad. By listening to him (and others of course) I was able to vastly improve my photography. So don’t get mad, start listening!

Next you need to: Want to learn.

Photography is like anything else. If you want to succeed, you have to want to learn. This will require time, energy and resources ($$), but can be worth it in the long run if you truly want to improve your photography.

What To Do Right Now

1. Go watch videos about photography. Go to youtube and watch a ton of free videos or buy a program done by a professional (I recommend CreativeLive).

2. Find photographers you like and view their work on a regular basis. Constantly view photos you like and that style can slowly come to your work.

3. View photos that are not of trains. To be great at railroad photography, it helps to know the basics of other kinds of photography (landscape, environmental portraits, photojournalistic approach).

4. Then ask yourself “what elements of this photo do I like or dislike”. Do your own critique. Figure out what you like, then go find a way to capture it. To this this day, I still view at least 100 photos a day.

Now there is a lot more that goes in to becoming a good photographer and I’m sure I’ll touch on those in future tech tips. But the last point I wanted to make was about keeping a quality portfolio.

Like I showed you above, there are a lot of images on my Flickr that should be in the trash. This is a good reminder that you need to occasionally go back through your portfolio and delete the “trash”. Deleting photos can sometimes improve your portfolio as much as adding photos. So if you’ve been shooting for awhile, go back through and take a look. Don’t end up like me!

What do you think? Do you edit your portfolio often? If you find some laughable throwbacks share them with me. I’d love to see them!

Comments, questions, concerns? Leave a comment or hit “Contact Jake“! I love to hear from you guys.

One of the hardest things to understand as a young photographer is the concept of “good light”. Other photographers will often throw phrases at you like “High Sun!” or “Backlit!”. You’re going to want to learn light as quickly as possible as it will make a dramatic change in the quality of photographs you are able to capture. Luckily, there is an app for that!

SunCalc is app that can help you accurately measure the sun’s angle right on the internet. Once you get comfortable with how to use it, you will know exactly how and when you can take incredible photographs, with awesome light. Check out these examples where SunCalc helped me capture that perfect light.

So I wanted to capture a train coming around this cool curve at Oroville. I wanted light on both the front and side of the locomotive,  so I knew I needed a good light angle. I went on to SunCalc.com to see when the light angle would be the best. I selected the date I was shooting, which happened to be January 20th, 2014. Then, using the sun slider at the top of the page, I moved the sun angle. After playing with the slider for a few minutes, I found the perfect angle. I marked down the “perfect” time along with the bookends of “good” time. You’ll learn quickly that a train won’t always show up right at the “perfect” time.

So I packed up my gear and headed trackside for the afternoon. I ended up getting very lucky as a MOW (Maintainance of Way) work window was just clearing up, meaning a backlog of trains were headed my direction. The first train came at 16:11 (4:11pm), right in my window of “good light”. I think the light this shot turned out very nice. What do you think? (Let me know in the comments below.)

An ethanol train from the midwest rumbles through Oroville, California with the Sierra Nevada Mountains providing the backdrop.

We’ve All Shot In Bad Light

I’ve certainly done it. A number of times in fact. Now my reasoning varies from “I’ve never been to this location before so I’ll shoot everything I see” to “This train is just too cool not to photograph”. And at the end of the day, shooting in bad light is fine, if you want to “document” whatever it may be. . But when you want to take your photography to that next level, you’ll need to be shooting in good light. 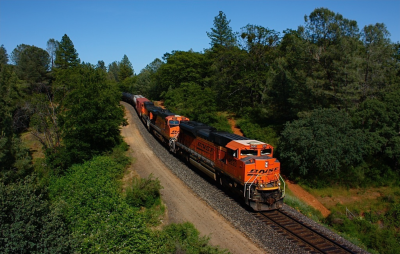 To avoid taking shots like these, use the SunCalc like I did in that first shot. Once you become more comfortable out in the field, you will learn how to quickly “read” light, and SunCalc won’t be needed as often. But until then, use SunCalc and capture that train in perfect light!

What About High Sun?

Now you might be wondering, how can SunCalc help me with “High Sun”. Well first you’ll have to understand what exactly “High Sun” is. If someone says, “that shot has high sun”, they are saying the sun was at an extreme angle, causing bad shadows across your train along with overall unattractive light. High sun is usually only a problem during the summer months when the sun passes overhead around 1pm. This graphic might help you understand sun angle.

Notice how the orange line is about half the length of the yellow line? That means high sun will be starting right about 11:00am this time of year. Generally, anything shot before 11:00am will not be affected by high sun, while anything shot after 11:00am will probably be affected by high sun. Now of course, there is a big difference between shooting at 11:01 and at 1pm (when the sun is at its highest angle this time of year), but it gives you a general time frame to work with. If I were to go shoot around Chico on August 9th, 2014, I would want to spend my time shooting trains between sunrise and 11:00 and then from 3pm to sunset. This would allow me to rest during the period of bad light and focus all my energy when there is good light.

Can you see the unattractive light in the following shot? Notice how the sun angle has created very unattractive shadows on the side of this train. Also notice how the rail is completely covered in shadow. These two clues, along with the overall look of the picture tell me this was taken during high sun. Could you imagine how nice it would have looked in good light?

Do Not Be in Denial

It is hard to accept as a young photographer that you have to wake up early and stay up late for good light. In an ideal world, the best light would come during the middle of the day, allowing us to sleep in and then get home for dinner. But getting yourself out during the best light of the day is crucial if you’re wanting to take your photography to the next level. Capturing an awesome scene is only “good”, capture an awesome scene in amazing light is “great”.

So get yourself out there! Get up early, rest during high sun, and then capture more amazing content as the day draws to a close. If you capture something “great”, I would love to see!

How about you? What are tricks for calculating “great light”? Which photo of yours do you think has the best light? Let me know in the comment below.